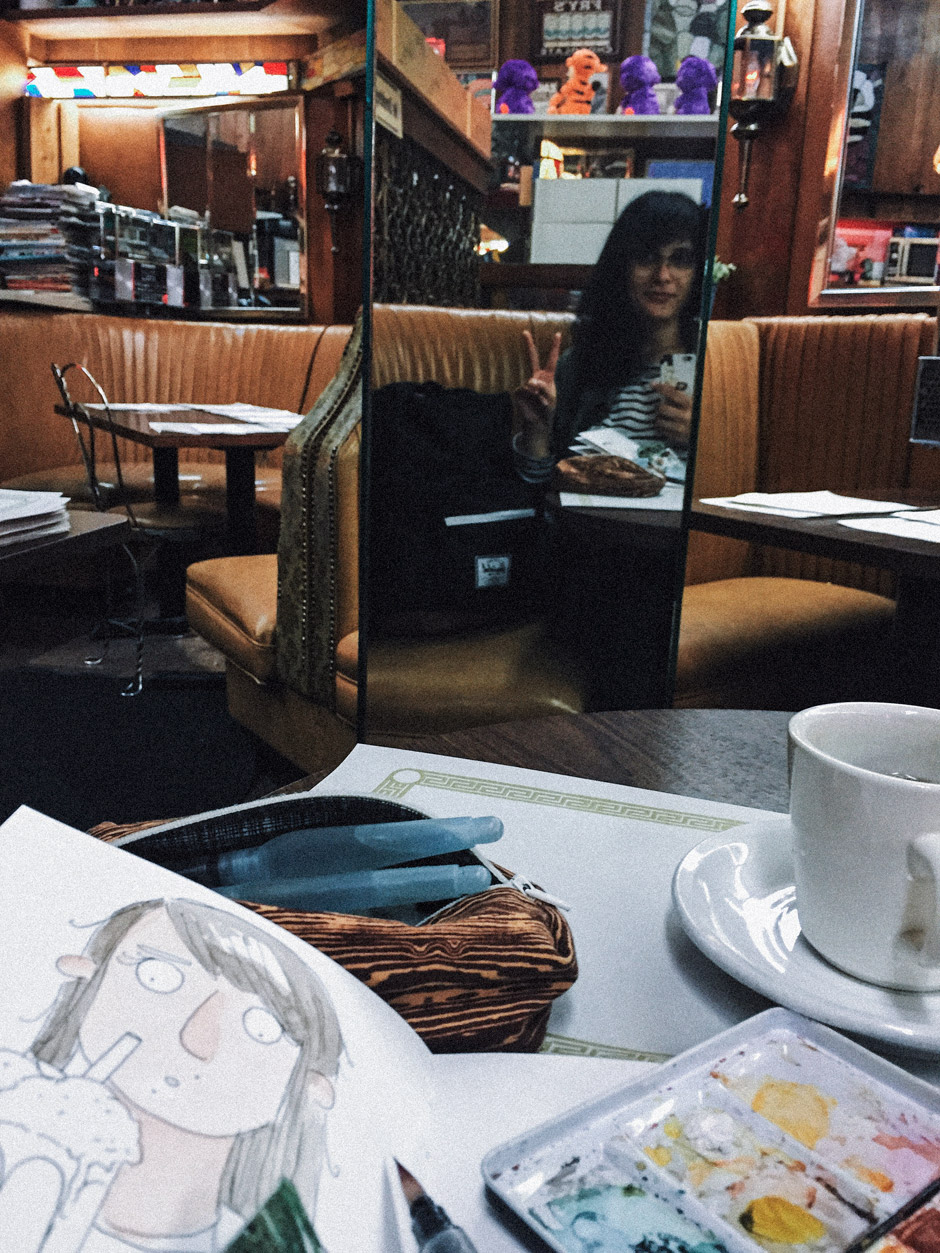 If I were to sum up 2015, it was definitely Moonlight Sonata (1st and 3rd movements) with a dash of Alone Again, Or, a soupçon of All We Ever Wanted Was Everything, and a big, heaping shovelful of Swim and Sleep (Like a Shark). Something like anxious melancholic nostalgia and a longing for something/one I didn’t know I needed until I had a taste of it.

It was, without a doubt, an interesting year. I filled out 5 sketchbooks with fucked up feelings, travelled to Joshua Tree, San Francisco, Denver, NYC, and Chicago. I made a few new friends, had my silly work written about, broke my phone screen 4 times, kissed a handful of frogs, saw my favourite band play down the street from me, spent a good chunk of work hours covered in kittens, painted and published half a tarot deck, did an oil portrait of my favourite panda, produced some pins, and amassed quite the collection of lessons learned, bitter disappointments and dashed hopes in the process.

Hey, if it had been easy, I wouldn’t be appreciating it as much, right?

So what’s next for 2016? Truth be told, writing this is a bit out of character for me. I don’t typically acknowledge the end/beginning of a year for the simple reason that it doesn’t matter. Time doesn’t work like that. It doesn’t have start and stop points, it just keeps going whether you’re ready for it or not, you know?

But with that being said, in the next 366 days (it’s a leap year!), I’m going to do what I do every time: keep on being the same awful, unlovable person and plan on nothing and anything happening. I’ll be working on the Minor Arcana for my tarot deck and a Panda Scott tunnel book. I’m sure there will be more pins and weirdo oil portraits, and all manners of the usual nonsensical malarkey as well. Everything else is a big, fat mystery, and I like it that way. Who knows? Maybe I’ll finally be someone’s reason to wake up in the morning, or perhaps I’ll kick the bucket in the middle of a nose picking sesh. This time loop is my oyster!

IF YOU’VE MADE IT THIS FAR DOWN THE PAGE:
Thank you for sticking with me and supporting my work. I am really grateful that you are here, it keeps me going and pushing myself in ways I’m not entirely certain I wanna go, but I do it anyway because I really like being uncomfortable.

Here’s a small playlist I did to get into the mood to write this. It’s kind of a bummer, but every song addresses a feeling and moment in time. Gross, I know.